Planting Corn for Silage after a First-cut Alfalfa Harvest

It’s early June, you’re looking at a rather marginal alfalfa stand, the haylage silo is nearly empty, and you generally use some corn silage in the dairy ration.

Here are the options:

What are the advantages and disadvantages of each option?

With Option 1, you give-up all alfalfa production on the field for the current year but insure maximum yields of corn silage from early planting and using a full-season hybrid. This still may not look too appealing if you REALLY need the alfalfa in the short run or if it’s a relatively new alfalfa stand and want to capture more return on the establishment investment. Chances are good that you will be taking another field planned for corn and seed it down to alfalfa. Hence, at least some establishment year yield will be recovered.

With Option 2, you get some alfalfa production to fill short-term needs at the expense of reduced corn silage yields. Even with this option, you may be seeding another field to alfalfa that wasn’t originally planned (unless your other alfalfa fields are in good condition).

With Option 3, you forego the additional corn silage production but increase the amount of total-season alfalfa harvested. The amount, however, will be reduced compared to a full, productive stand.

How important are weather conditions?

The best planting option to choose varies with each year and farm situation. The right decision usually is dependent on both early spring and June weather conditions, the latter of which can never be predicted at the time of the decision. Assessing alfalfa growth as of early May can be somewhat helpful. If growth is well behind normal, you can be sure corn won’t be planted until after the first week in June. At this point, silage yields are significantly reduced and may make Option 2 less desirable. Conversely, if growth is well ahead of normal from favorable April weather, the likelihood of getting corn planted before early-June increases. Where corn is to follow alfalfa, harvest the alfalfa as early as possible.

Whenever Option 2 is selected, adequate rainfall has to come in June or the impending corn crop will be a disaster (this unfortunately has been confirmed from many past experiences). At the time of planting corn, the alfalfa has already depleted an abundance of reserve soil moisture and the subsequent corn crop has to have post-planting rainfall for early season growth and to compete with weed pressure. If you see that corn planting is not going to occur before the second week of June and soil conditions are dry, the least risk option is to keep the current alfalfa stand (Option 3).

What is the yield and quality penalty for planting silage corn   after first-cut alfalfa?

Studies have been conducted at Arlington, WI to assess the yield and quality penalty for late-planted corn harvested as silage. In corn silage, a key quality component is the ratio of grain to stover in the forage. Less grain yield usually lowers silage quality. Corn forage yield decreases with later planting date (Figure 1). 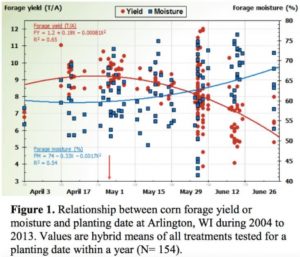 Forage yield of corn planted on June 1 is lower than earlier planting dates in May and April. By the end of June, yield levels are about 50% of the maximum yields observed around May 1st.

NDFD content is not affected; however, starch content by the end of June is about 50% of the maximum observed around May 1st (Figure 2). 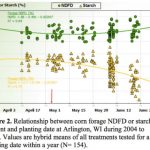 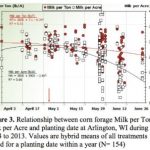 Finally, when faced with late planting dates, choose appropriate short season hybrids to increase the probability that the crop will reach harvest maturity before the first fall frost.

Is it best to plow the harvested alfalfa field or no-till corn directly into sod?

Wisconsin research during the mid to late 1980’s compared moldboard plowing to no-tilling corn into alfalfa sod following a first-cut harvest (Smith et al., 1992). Although the corn was harvested for grain, some comparisons are applicable. For all three trial years, corn emergence was reduced 8 to 20% under no-till compared to moldboard plowing. This was attributed to a dry soil surface. Although stands were over planted to compensate for plant density differences, no-till crop yields were reduced 60 and 20% in the two driest of the three trial years. In the third year, where moisture was adequate, there were no significant grain yield differences. Hence, no tilling into the alfalfa sod is an option, but much more risky if adequate rainfall doesn’t occur.

Weed management for corn following first-cut alfalfa offers some unique challenges as both the alfalfa and the weeds that will emerge in the corn crop require management.

Because of these issues, growers often opt to use herbicides to  terminate alfalfa fields. The advantages of herbicides are that they can be done faster, at less expense, and often have consistently better results in alfalfa termination and weed management without losing soil moisture compared to tillage. While a range of herbicide options are available, most frequently glyphosate is used. Applications not only provide good to excellent results at controlling alfalfa and all other non-glyphosate resistant weeds that are emerged, they allow corn to be planted after hay is harvested as no plant back restrictions exist with this herbicide. Many glyphosate formulations allow alfalfa to be treated with up to 1.5 lbs ae/A at least 36 hours before harvesting the alfalfa. This timing is recommended as it will allow for hay harvest, and improve effectiveness as weeds are larger and aren’t resprouting after being cut. This option will only work on non-Roundup Ready alfalfa varieties. Alternatively, herbicides could be applied after harvest and regrowth (at least 4 inches regrowth is recommended). While a range of options exist, typical treatments involve the use of 2,4-D or glyphosate. We recommend including one pint/A dicamba (0.5 lbs ae/A) to increase effectiveness on alfalfa. Check the plant back restrictions for each herbicide used, as restrictions are herbicide and rate specific. This could delay planting an additional 1-4 weeks.

Appropriate amounts of phosphorus (P) and potassium (K) need to be applied in the corn starter fertilizer based on soil test levels. Even where P and K levels are extremely high, University of Wisconsin research has confirmed a high likelihood of starter fertilizer response with later plantings (Bundy and Andraski, 1999). A minimum of 10 lb. N, 20 lb. P, and 20 lb. K per acre needs to be applied as starter. Potassium may be especially important with corn following first-cut alfalfa because the initial harvest has already extracted a significant amount of K from the soil and corn silage is a high K demand crop. If the soil test level is not known, apply a starter fertilizer with a high K analysis or broadcast additional K prior to corn planting.

Double-cropping corn for silage after a first cutting of alfalfa is a management option when forage is needed early in the growing season. However, the success of this management strategy is highly dependent on spring growing conditions (primarily heat units) along with early summer rainfall and must be done with the realization that corn silage yield and quality will often be significantly less than that of early- planted corn. The practice has a higher likelihood of success in southern Wisconsin than in the north. In Pennsylvania, where extension personnel endorse double-cropped corn after first-cut alfalfa, they are also quick to point out that such a practice is not very forgiving to poor management (Roth et al., 1997).

Kewaunee County UW-Extension is pleased to welcome Carmen Haack for the summer as an agriculture program area intern. The  opportunity was made available in part by a James Crowley Fund grant designed for a Dairy Science student at UW-Madison. Carmen will be working on a variety of projects such as dairy forage, hoof health, beef cow/calf meeting planning, and of course, Farm Technology Days. We are excited to have Carmen on board with us this summer! 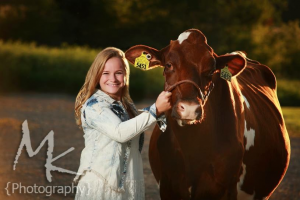 Hello Everyone! My name is Carmen Haack and I am the daughter of Pete and Vonnie Haack. I am very excited to be interning with UW-Extension in Kewaunee County this summer. I am from Algoma and have been involved in 4-H for almost 11 years, so I am really looking forward to working with an agency that helped me so much throughout my youth career. I grew up showing mostly dairy cattle from a farm owned by my grandparents, aunt, and uncle, called “Synergy Dairy”  in Pulaski, WI, so agriculture has definitely been a big part of my life. I graduated from Algoma High School last May and am currently attending the University of Wisconsin – Madison pursuing a degree in Dairy Science with an Agricultural Business Certificate. I am hoping to bring the knowledge I gained in my first year of school back home for the summer in order to learn a lot more about agriculture in Kewaunee County!

The entertainment schedule has been set for the Family Living stage at Farm Technology Days. Some highlights of the three days include:

PLEASE NOTE: THESE CLASSES ARE SUBJECT TO CANCELLATION IF THERE AREN’T 20 STUDENTS ENROLLED IN THE CLASS.

Kewaunee County Farm Technology Days 2017 is less than a year away! If you would like to volunteer, exhibit, or find additional information on the show, visit: http://www. 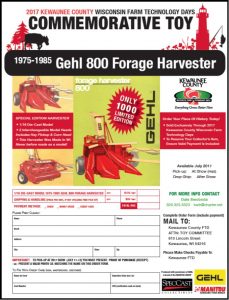 You can also find order forms for the limited edition commemorative Gehl 800 Forage Harvester and the Lanmark Farm program. You can also cut the forms out of this newsletter and send them to the addresses listed.

Connect with Extension experts from universities across the country.

We teach, learn, lead and serve, connecting people with the University of Wisconsin, and engaging with them in transforming lives and communities.

Connect with your County Extension Office

Find an Extension employee in our staff directory